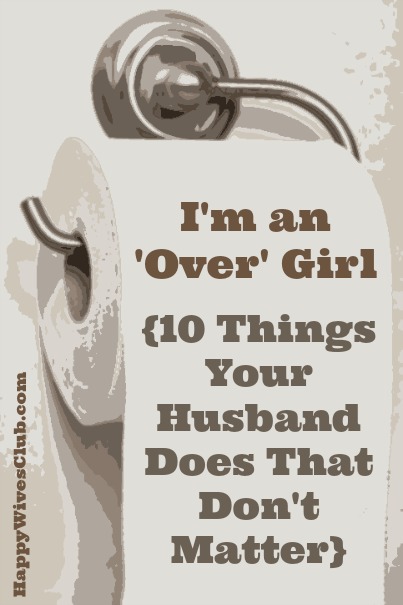 There is a quote I love by J & G Murphy, “Make a list of ten of your spouse’s faults, which, for the sake of your marriage, you will always overlook. You can live with those ten.”

Can you think of your ten?

She was talking to her guest and somehow (I don’t quite remember how) the conversation turned to toilet paper and how some people like to position the roll so the paper is grabbed from the top and some like to pull it from the bottom.

Growing up, my mother was quite particular about this and she was definitely an over girl.  Let’s just say I was a tad rebellious in my youth (surprise, surprise), hence, I’ve always been an under girl.  And I bet you can guess which way Keith prefers.  Yep, he’s an over guy.

For years, he’d position the toilet paper on the holder so the paper would push from the top and when it was my turn to change it, I’d position it so it pulled from the bottom.

I wouldn’t even think about it.  Years of living by myself and doing things my way taught me that the toilet paper should be pulled from under.  His years of living alone assured him the exact opposite.

But here’s the point.  It’s all a bunch of nonsense!

Who cares which way the toilet paper is positioned?  For that matter, who cares if your spouse drinks directly from the carton of milk or leaves a box of cereal with such a small amount contained any “sensible” person would have thrown it away rather than returning it to the cupboard from which it came?

When building a relationship that will last a lifetime, one of the silliest things we can do is get caught up in the small things that will not matter in the end.  So pick ten things, heck, pick twenty things your husband does that are different from the way you think they should be done, and just live with those.

Today, I’m an over girl.  After more than three decades of insisting toilet paper made more sense to be pulled from the bottom than the top, I intentionally looked at it from my husband’s point of view and realized I may have been wrong.  It actually makes quite a bit of sense to go from the top.  Then again, it makes just as much sense to go from the bottom.  But more important than both of those perspectives…it just doesn’t matter.