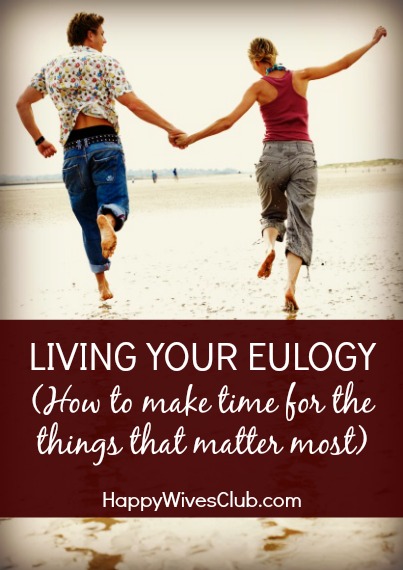 Living Your Eulogy: How to Make Time for What Matters Most

Living Your Eulogy certainly sounds like an odd title for an article on the Happy Wives Club.  But this morning, as I sit in an oversized chair in my hotel room in Rancho Palos Verdes, California, this weighs heavily on my mind.

I am here for an executive board retreat.  And although I sit on a couple nonprofit exec boards, this weekend, I am here as the spouse.

My husband, who would most certainly prefer to be sitting next to me while I write this overlooking the glistening ocean, is in a nondescript board room somewhere on the hotel grounds.

As I walked to grab a cup of tea at the front of the hotel this morning, I saw his group having breakfast on a terrace nearby.

Keith loves red eyes (coffee with a shot of espresso), so while ordering my tea, I decided to order him one.  I then sent a text, “I got you a red eye and will stealthily drop it off.  I love u!”

On the way back to my room, I went to the area where I’d seen them earlier and asked a young worker, “Please take this coffee to the tall black guy in the room – he’s 6’4″.”

Twenty minutes later, upon seeing the text, I received one back, “Oh, they gave it to Dutch – wrong black guy.”  Moments later, “I’m drinking it now – I love you,” was his response.

When all our friends and family gather to say farewell to me for the last time, it’s memories and exchanges like this I want to be remembered.  That I thought of my husband often and tried to surprise him with little things he loves.  That I was a wife who loved her man with an endearing love, an unwavering love, a fully trusting love.

This is what I want to be included in my eulogy.

Who cares about that?

Earlier this year, when releasing my book, Happy Wives Club, I set an audacious goal: to debut at the top of the New York Times Best Sellers list.  When it debuted at #3, behind Lone Survivor and The Wolf of Wall Street -both books based on hugely popular movies at the time and nominated for Academy Awards- I considered that a failure.

When the vice president of marketing for my publishing company called to tell me the “great news,” he was met by an awkward silence.  I was disappointed.  I’d set a goal and didn’t achieve it.  For months, I didn’t celebrate that amazing milestone but rather remained focus on how to do get it to the top of the chart.  The type-A in me wouldn’t let that goal go unmet.

When the inscription is placed on my tombstone, there will be no mention of bestselling books.  My ability to keep the house clean, while juggling the writing of my next book, inking new business deals and building brand partnerships, will be nowhere to be found.

Because none of that really matters.

What will be on my tombstone, God-willing, is: Fawn Weaver -loving wife, nurturing mother, faithful sister and daughter, friend to the needy.”  That’s it.  That is what I hope to leave behind.

So where do the emails, business deals, bestselling books, and everything else that has taken up the bulk of this year fall?  Nowhere.  There is no place for it on my tombstone.  There will be no mention of it in my eulogy.

In 1888, the brother of Dr. Alfred Nobel died.  In error, several newspapers printed his obituary.  When he opened one of the french papers and read the headline, “Le marchand de la mort est mort,” which is translated, “The Merchant of Death is Dead,” he was horrified.  The obituary went on to say, “Dr. Alfred Nobel, who became rich by finding ways to kill more people faster than ever before, died yesterday.”

It is reported that Alfred was so disappointed by what he read that when he passed away, his last will and testament -signed after his ill-timed obituary was printed- gave 94-percent of his wealth (in today’s time, around $500 million) to establish what we now know as the Nobel Peace Prize.  In getting a glimpse of what was destined to be his obituary, he decided to spend his final years rewriting it.

Dr. Alfred realized money, power and wealth are not what people remember.  It is everything -minus those things- that will account for your life: generosity of heart, love of family, care for people, graciousness and the like.

Many of us take pride in our busyness.  But what are we busy doing?  If it is not adding to what we will leave behind, rest assured, it is subtracting from it.

So what are you currently giving priority to that will not matter once you’re gone?  I challenge you to begin, in this moment, living the life you want to be remembered for when you’re gone.  To give your absolute all to your spouse, family and friends.

That email can wait.

Those dirty dishes will still be there in 4 hours.

Take a moment to have a glass of wine with the ones you love, toast to the breath of life, and commit to begin tomorrow different than you began today: prioritizing your life based on what you desire to be said once it comes to an end.  Because, ready or not, it will assuredly come to an end.