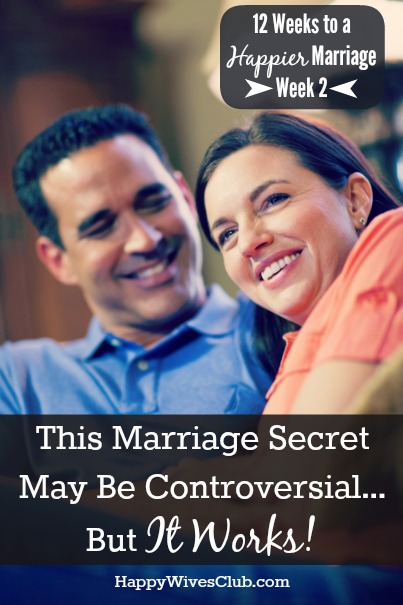 This Happy Marriage Rule Is Controversial…But It Works

**Welcome to week two of this 12-week series based on the New York Times® bestselling book, Happy Wives Club. Join me here weekly as I share 12 principles about marriage I’ve learned from some of the happiest couples around the world.**

I’m not a huge fan of controversy.  Some people thrive off of conflict.  After many years of operating that way, I found it far more effective to find a middle ground rather than insisting on one right opinion.

This aversion to controversy is likely what has caused me to keep one major happy marriage secret…well, a secret.  At least, I’ve not broached the topic on here.

The interesting thing about this “secret” or “happy marriage rule,” if you will, is I am yet to meet a couple -who have been happily married more than 25 years- that did not swear by the importance of it.

So what is this marriage rule I shudder to mention?

Put your marriage first.  Then children.  Then all else.

“Do you think I’m a bad person for saying that?” I remember Sandy asking me as I was wrapping up my interview with her for my book.  She and her husband were married 53 years before he passed away.

“Of course not,” I responded.  ”Every couple I’ve ever met, who have been happily married for decades all live by your same rule,” I assured her.

I don’t remember the first time I heard this “happy marriage rule,” but I can tell you, every happily married couple I’ve interviewed (and I tend to only interview those married for at least a quarter of a century) have all done this one thing.  It was paramount in creating and guarding the marriage of their dreams.

There are at least 5 benefits of putting your marriage first:

1. If you have children, they will thrive.  Research has proven time and time again that parents who have a loving and stable relationship instill confidence and reinforce stability for their children.  The best thing you can do for your kids is to let them see, hear and experience firsthand that you and your spouse are still in love and the family -even if it is a blended one- will be together forever.

2. Creates a united front.  Whether facing challenging times, exciting opportunities, or establishing boundaries for your kids, this united front is important to everyone around you (especially the two of you).

3. Teaches your children what to look for when choosing a spouse.  Being a living example of the marriage you want for your own children teaches them at an early age what love looks like (and what it doesn’t).

4. Helps you to create the marriage of your dreams…until the very end.  Marriage is a gift.  It is an investment.  It requires consistency and effort.  But it can also get stale and become stagnant if we aren’t conscientious of renewing our efforts to connect with one another daily.

5. Allows you to enjoy the empty nest years.  Have you ever met a couple who, after the kids have moved out or the spouses have retired, had to get to know each other again?  This is one of the most difficult things to do after years of putting other things ahead of your marriage.

If you’d like a step-by-step on how to accomplish this in your own marriage, WedMD did a great article on 7 ways to put your marriage first, that shares not only the how but the research behind why this principle is so important.

YOUR TURN: For those of you already doing this, what other benefits have you experienced from putting your marriage first?