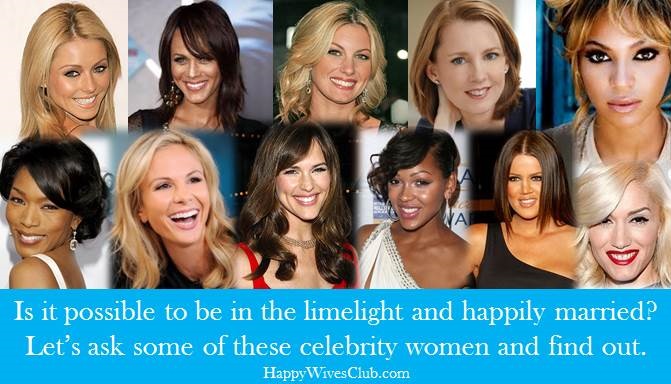 Which Married Celebrities Should We Interview?

Have you ever wondered if it’s possible for women in Hollywood, successful authors, ultra-successful businesswomen, etcetera, to also be happily married?  I certainly have.  I’m fairly certain I know the answer but I’d still love to find out.

Most often, when I interview happily married women and write about their lessons (aka secrets of their successful marriage) here, they are women you’ve never heard about.  Not because they aren’t successful in their own field of business or in maintaining their home, but mainly because it’s a large world out there with over 6 billion people.

Chances are, the only people we all know (or at least feel as though we know), are the ones plastered on magazines everywhere we turn.  This got me to thinking.  Maybe it’s possible for us to shrink our world just a little bit.

We’re a fabulous community of more than 100,000 members worldwide and I’d like to introduce you to some of the women you may have already seen on television or in the movies, but who are -more importantly- happily married with wonderful families.

I reached out to a few yesterday by Twitter: actress Candace Cameron Bure, actress Meagan Good, reality television starlet Khloe Kardashian Odom, author Amy Tan, author Elizabeth Gilbert and author Gretchen Rubin.  And now, it’s your turn to tell me which ones you’d like to hear from.

Which actress on your favorite television show or movie is married (in real life)?  What author have you read about who seems to have an amazing family life?  Tell me and I’ll seek out an interview with them.  Yes, we know, everything that glitters isn’t always gold.  But every now and then, what glitters is actually gold so let’s interview them and find out.

Some may say no, a few might say “I’m too busy,” but something tells me we’ll get alot more “yeses” than anything else.  So let’s go for it!

What I love about asking you this question is when I first began this Club, I interviewed women happily married 25 years or more and asked for their secrets to a great marriage.  I’ll be reviving that as a part of this series and posting their interviews, as well.

So here’s one more question for you.  Would you prefer to watch the interviews (meaning, an interview via Skype), hear the interviews in a podcast format or read about them here?  Enter your answers in the comments section below and we’ll announce who will be our first interview shortly.  Excited!