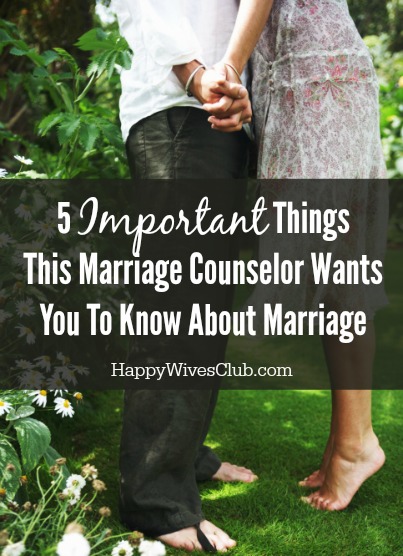 5 Things I Learned About Marriage From Being a Marriage Counselor

You may know him from Twitter as @MarriageDr and I had the pleasure of meeting him face-to-face at a MeetUp I hosted in Denver.

Aaron Anderson’s marriage and family clinic in Denver is so busy, that although I made the request, I wasn’t sure he’d ever have time to write an article for Happy Wives Club.

Then he got a question. about marriage he’d never been asked before  A question that stumped him.  One that caused a flurry of thoughts to rush through his mind and he couldn’t rest until he knew the answer.

That back and forth in his mind, led this to post, and when Annett (our content manager) first received it, she emailed me, “I love Aaron’s post!”  And so do I.

As a marriage counselor, I get a lot of questions from friends and strangers about things going on in their relationship.

The questions are usually pretty ordinary. Things like “How do I tell her I don’t want to go to her family’s house for Christmas” or “Should I tell him I really don’t like his mother’s mashed potatoes?”  But every once in awhile I’ll get a question that really challenges me.

I got one of those questions yesterday. It was from a young man in my church who was about to get married. He asked me “What are some things you’ve learned as a marriage counselor that you wish you knew before you got married?”

I took a deep breath as if to say something but nothing came out. I haven’t thought about that – ever. I told him I’d have to get back to him. When I got home, I became flooded with thoughts. They were coming so quickly I had to write them down. So now here I am trying to sleep and I can’t.

There’s too much on my mind. As I’m writing down my thoughts, I realize this isn’t just info I want him to know, I wish everyone could know these important things about marriage.

5 things I learned about marriage from years of marriage counseling:

Marriage is more than just a no-matter-what commitment. I had one client say it best. She told her husband that “I don’t want you just to be married to me. I want you to love me and like me, too.”  Marriage is a commitment, but it’s also a lifelong adventure and journey of love with each other.

2) Marriage is also passionate. Not only is marriage supposed to be loving, it’s supposed to be passionate, too. Sex is the one thing that separates you and your spouse from being just roommates.

Without that passion that goes along with a vibrant sexual relationship, you’re just being roommates. And marriage isn’t meant to be just living like roommates – that’s why it’s called marriage. When spouses share passion, sex, and everything that goes along with it, then they’re really being a married couple.

3) Sex in marriage is waaay different. I see a lot of couples who come to me for marriage counseling because their bedroom has become bland and boring. They tell me that sex used to be rockin’ before they got married but now that they’ve been married awhile it just doesn’t have the same excitement it used to have. They’ve even tried new things and it still hasn’t helped. It just doesn’t have the same flare that it used to.

4) Marriage really does have its bad times. You’ve heard it before. You probably even had someone write it on a card they gave you at your wedding. But it really is true. Marriage really does have its bad times. And I don’t mean the bad times you see on TV where it gets solved in a half hour. Heck, it’s not even like the shows where the problems get solved in a few episodes. Marriage has low times that last for a while. And during those low times you question how you could ever feel so low, and whether you made the right choice or not.

But despite how low these bad times feel they are almost always followed by good times, too. These low times are learning times and can help you and your spouse address whatever it is that’s causing the problems so you can have an even healthier and happier relationship.

5) Marriage is the most rewarding thing. A couple of years ago, on a plane back from a conference, I sat next to perhaps the most interesting guy I’ve ever met. He was an older gentleman getting close to retirement. He told me about some of the life struggles he and his wife went through with their family and kids. In the end, he told me that if he never had kids he could have been a millionaire years ago – but he’d rather have the kids.

Aaron Anderson is a Licensed Marriage and Family Therapist and owner of The Marriage and Family Clinic in Denver, CO. He also writes for several publications online and in print all on the topic of marriages and relationships. In his spare time (whatever that is) you'll probably find him in the garage working on his hotrod. You can find him on Twitter @MarriageDr and on Facebook giving great info without the psychobabble. 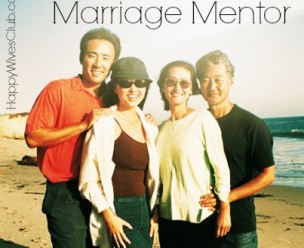 5 Reasons You Should Have a Marriage Mentor