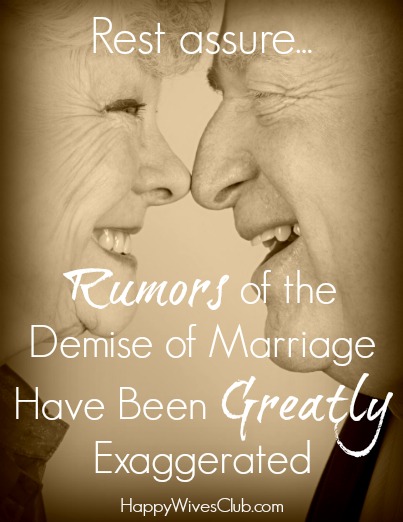 The Demise of Marriage Has Been Greatly Exagerrated

Rest assure, rumors of the demise of marriage have been greatly exaggerated.

Would you like to know how I know?  Why I am absolutely, positively certain?

This community of close to 200,000 in 110 countries around the world tells me marriage is alive and well.

How many other things do you know of where people from so many different cultures, backgrounds, religions, political beliefs, etcetera all see eye to eye?

And yet, we all wholeheartedly agree about two things: 1. Marriage Rocks! 2. So do our hubbies.

One of the things I love most about this community is there is no religious agenda.  No political affiliation.  We share one thing universally: Love.

You may not know this (although many of you do) but I founded this club as an antithesis to what we see in common culture.

Movies like the Stepford Wives and television shows like Desperate Housewives, the Real Housewives of (coming to a town near you), and others like it have shaped the way the world sees us.

There is this misperception that all wives are miserable, most husbands cheat, and marriage is just another word for the “old ball and chain.”  Who really knows when this less than positive view of marriage began, why it began and when it will stop.  But this we do know.  We can change the perception of marriage, not only in America, but around the world.  And we can do it spotlighting one happy marriage at a time.

It was with this desire that I reached out to an amazing husband and wife filmmaking duo in Seattle, Washington and asked them to create something we could all share on our various social networks to show the world happy marriages do still exists.

I wanted something that would encourage those new in marriage that their union could -and will- last a lifetime if they put in the effort to make it happen.

My heart’s desire was for it to be something women like you and I could stand up and cheer for, proclaiming: I am a happy wife!  A visual storytelling of what love looks like thirty years from I Do.  I think you’ll agree that was achieved.

A loving marriage is a beautiful thing.  I know it.  You know it.  Now, let’s let the world know it.  As the short one minute video says: Share your love.  Share your passion.  Show the world happy marriages exist.

Hollywood has given us their version of marriage.  Now, let’s give them ours.

SAVE THE DATE: Bloggers, join us here every third Monday of the month for our fabulous link-up party! Join us September 16th for our next Marriage Mondays!