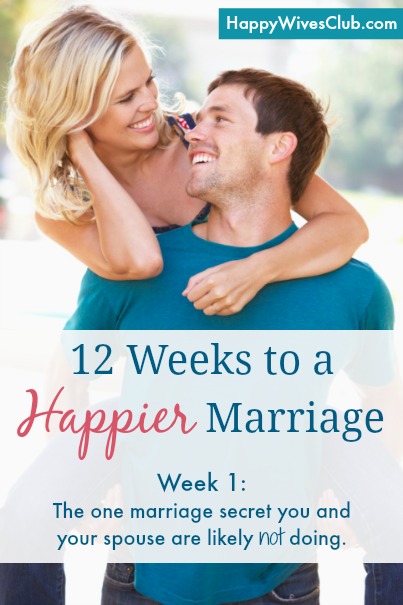 12 Weeks to a Happier Marriage: Week 1

**Welcome to week one of this 12-week series based on the New York Times® bestselling book, Happy Wives Club.  Join me here weekly as I share 12 principles about marriage I’ve learned from some of the happiest couples around the world.**

I’m not quite sure where I was when I first had this realization.  Maybe it was in the Philippines after interviewing a couple who’d just celebrated their 50th anniversary.

Perhaps it was in Perth, Australia following back-to-back interviews with two happily married couples who have both been in love longer than I’ve been alive.

Somewhere between Asia and the South Pacific, I had this huge aha moment.

I’d traveled all over the world, to interview happily married couples before realizing they were all sharing one marriage secret I’d never heard about.  Quite frankly, I don’t even think most of them took note that they did it.

I thought, How is it possible that couples on 6 different continents were all doing this one thing, and yet, most couples married less than 20 years -including Keith and I- don’t even know about it?

Prior to getting married, I heard from many the importance of a weekly date night.  I bet you’ve heard that many times too.  And yes, that is hugely important whenever possible.  Yet, many of these happily married couples I interviewed didn’t go on weekly dates.

However, what each of them did instead, I’ve come to believe to be an even better way to stay connected.

Every couple I’ve interviewed (happily married 25-plus years) -from North America to South America, Africa to Europe, Asia to Australia- has a daily ritual.  They make the time to do something together…each and every day.

Nothing fancy.  No getting dressed up or spending money at a restaurant.  No spending hours in the kitchen trying to cook the perfect meal or dusting off the china.  What these couples did were simple.  It had been a part of their marriages for so long, some didn’t even realize they had a daily ritual until I pointed it out to them.  It was simply a part of the fiber of their marriage.

Dot and Ken in Cape Town have been waking up every morning for more than twenty years and having what they called their “daily board meeting.”  Ken goes downstairs before dawn every morning and gets two cups of coffee.  Dot gets up and and opens the windows around their bedroom.  Then they both return to bed, backs against the headboard, and sip on their cups of coffee while watching the sun rise.  They  discuss their schedules for the day and anything else on their minds.

They do this every morning.

Miriam and Efi have been enjoying port and appetizers together every night before dinner for decades.  A tradition they began in Israel and continued once they moved to the US.  While their three kids were growing up, they knew they’d be joined by mom and dad for dinner around the table but the pre-dinner part…they weren’t invited to that.  And like Dot and Ken, the purpose of this time was simply to connect.  To share what was going on in their collective worlds, at work, with the kids, with extended family and friends.

Around the globe, I began hearing story after story of daily rituals from couples whose marriages were so beautiful I stood in awe.  A time set aside daily simply to connect with one another.  Nothing was off limits.  They shared each other’s dreams and life’s hopes.  Discovering how so many successful marriages from earlier generations include this made me wonder, How would my marriage improve if I added a daily ritual?

After two years, I can tell you, it changes everything…for the better.  If this isn’t already a part of your marriage, I encourage you to make the time to add it.  It may mean going on a television fast during the week so you can go to sleep and wake up earlier.  It could mean figuring out a way to connect for a walk around the park daily at the end of your day.

Before I knew about this marriage tip, Keith and I were completely in love and loved being married, but had also allowed our work schedules to dictate our lives.  We were often so exhausted at the end of the day, all we could do was collapse into each other’s arms.  But this marriage principle takes intentionality.  As the saying goes, “You will never drift together, you will only drift apart.”

Here are 3 things having a daily ritual in marriage can do for you:

1. Keeps you connected.  When you make a commitment to do something together, each and every day, for the express purpose of connecting, guess what happens?  You begin to connect on a level you never even knew possible.  Every hope and dream, you lay it out there.  And then you think of ways you can help each other achieve those dreams.  There are no rules to when, where or what you do for your daily ritual.  It’s completely up to you.  But putting aside at least 15 minutes a day (Keith and I wake up early so we can have 45 minutes at the top of the morning) will draw you closer to one another than you ever knew possible.

2. Builds trust like nothing else.  When you begin the day talking about everything on your schedules that day or conclude it recapping everything that went on within it, there is no place in your head for those voices that enter so many, “I wonder what he’s doing?  Why hasn’t he called?”  When there is nothing left unsaid between you, trust pillars are added on top of the foundation of your marriage to build up the house your marriage has built.

3. Gives you a structured support system.  Knowing you have someone to talk to about anything, at a set time each day, gives you a feeling of comfort and support.  You’re never carrying anything around with you.  Keith and I always tease that our rug stays clean because we refuse to sweep anything under it.  We talk about everything, and I mean everything, and having this time set aside each day ensures we have the time to do just that.

YOUR TURN: Do you have a daily ritual?  And if you don’t, what do you think implementing one can do for your marriage?