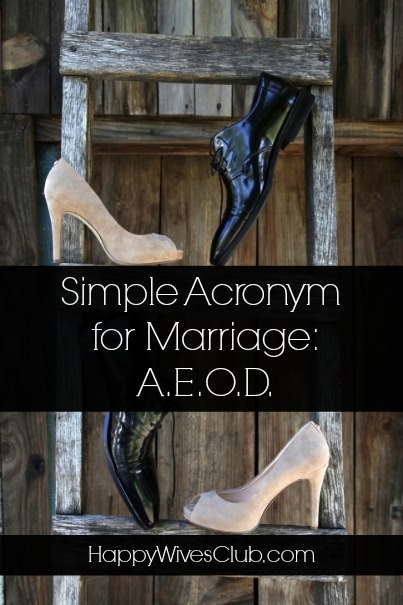 Acronyms are great reminders to do something we otherwise might forget.  Businesses and government agencies often use acronyms to ensure customers will remember them.  IBM.  AOL. AT&T.  NASA.  IHOP.  We may not know what A&W stands for, but we know they make one awesome rootbeer float.

There is a simple acronym for marriage I’ve found to be the most effective in helping a couple grow in love, become more patient with each other and remove common frustrations within most relationships.

If you’ve read this blog for any length of time, you know I’m a bit of a klutz. I stumble over my own feet, run into walls, and step on my husband’s toes often. For the first few years of our marriage, I accidentally kneed him in a very important place so many times that he’d brace himself whenever I came near.

I pace in front of the television and yell at the players on my favorite team, the San Antonio Spurs, when they’re giving up a game. I am not a fan of the word no or the phrase “you’re wrong” and can list many instances in which I did not respond well to either. There were times in the past, as Keith often pointed out to me, when my thinking and my speaking seemed to be one action.

What I just described about myself is the polar opposite of my husband, Keith. He is always calm, collected, rational, reasonable, well-spoken, and never, ever says anything without thinking about it first. He is a diplomat who weighs all sides of an issue prior to addressing it. He has great poise (doesn’t ever run into walls) and enjoys sports but is never fully invested in the outcome of the game. He loves feedback and can accept positive or negative types. He doesn’t mind being proven wrong.

However, he can sit in front of a television for hours watching back-to-back episodes of Mecum Auto Auction or Landscapers’ Challenge. “Really?” I’ve asked. “Are you kidding me? Didn’t you just see a garden that looked just like that in the last episode?”  He unwinds by doing random internet searches on topics like, “What happened to Ralph Macchio?” or “Where’s Tutti from Facts of Life?”  He’d rather spend Sunday morning waxing his car or pulling weeds than relaxing on the couch (which is definitely my preference).

>In an airport, his semi-claustrophobic side kicks in, causing him to resemble a drill sergeant. He does not want me to stop at any shops, get food, or even go to the bathroom. He wants to get to and from the terminal with little distraction. This is a challenge to me, because I like to look at everything, say hello to everyone, and pick up candy and sweets in as many places as possible.

Initially, it hurt my feelings when he’d begin barking orders at me whenever we were in an airport. But then I realized how uncomfortable being around so many people made him feel, not to mention all the people bumping into his large six-foot-four frame as we walked. So now I make a conscious effort to walk quickly with him to the gate of our flight before commencing my search for the best candy, sweet, or treat.

When Keith and I were first married, we couldn’t have been more different from each other. But over the years we have begun morphing into one another’s likeness. The transformation is amazing to watch. We still have a lot of differences, but we have found ourselves sharing more similarities with each passing day. That has come as a natural progression, because we’ve chosen to accept each other’s differences. His differences don’t annoy me, because I understand they are a part of who he is, and vice versa.

Sometimes we need to remind ourselves that the qualities that make our spouses different are also what make them great.  What made us fall in love with them was not that they were so much like us.  Do we now think so highly of ourselves that we want our spouses to be just like us? How arrogant. What small-mindedness.

For Keith and me, where he is weak, I am strong, and where I am weak, he is strong. Our differences balance each other out this way. Together we are wiser, richer, and stronger than if we were by ourselves. That is the beauty of marriage. The power of two is greater than the strength of one.

The next time your spouse does something different from the way you would do it, rather than stewing, try considering how the action makes them special. Marvel in the unique characteristics of your husband and accept them. Don’t try to change him. He will grow over time, just as you will too. Be patient.

I desire to be more of the wife Keith would like me to be, mainly because he accepts me the way I am and trusts that in time I will continue to grow and evolve.  He has mastered the art of A.E.O.D.  Marriage is not a sprint.  It is a well-run marathon.

Today, I run into fewer walls, step on Keith’s toes with less frequency, can stomach the word no and the phrase “you’re wrong,” and only yell at the Spurs when they are in the NBA playoffs or finals—giving up the game! It’s not perfect, but for me, it’s growth.