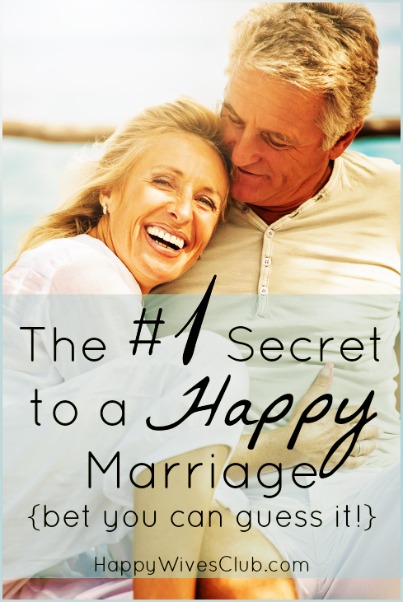 I know I’m making a bold declaration by claiming I may know the #1 secret to a happy marriage.  But hear me out.

Last year, with the backing of an awesome publisher (thanks, Thomas Nelson!), I traveled to 18 cities in 12 countries on 6 continents to interview couples happily married -25 years or more- to deduce the common denominator among them.

When I first launched the Happy Wives Club in 2010, I had a column on the site called Sage Wisdom.  For those of you who have been reading since that time, you probably remember that was my favorite section.

For that column, I would interview women happily married for more than a quarter of a century and share their timeless advice.

What I discovered in those interviews and in conversations with the women of this wonderful club, was no matter where a person resided in the world -and regardless of primary language, religion, socioeconomic status, culture or upbringing- they all sounded the same.

It was as if they grew up in the same household and all learned the principles to a happy and lifelong marriage together.  Some of their responses were uncannily similar. So much so that it got me thinking:

Is it possible there is a universal secret to a happy marriage and these couples know what it is and would be willing to share it?

That question fueled what would become a six-month long journey.  As a former hotel general manager for a Hilton-family property, and former manager for Starwood, I’d made friends from all over the world.  I contacted the ones I respected the most and asked these two questions:

“When I mention the phrases, ‘happy marriage’ and ‘still in love after all these years,’ who is the couple that instantly comes to mind?  If I were to come to your community, who would be the one couple everyone would vouch for as being 100-percent genuine and would say their love has stood the test of time?”

Asking those two questions was enlightening.  First, I learned that each of my friends could easily think of that one couple.  And second, I quickly realized that beyond that one couple, many couldn’t think of another like them.

So I reached out to each of the couples recommended -in Canada, South Africa, Mauritius, Croatia, Australia, New Zealand, and so many other places around the globe- and asked if they’d be willing to open up their lives to me and share their marital secrets of success.

By the time I arrived at my 7th country, I knew I was on to something very special.  I hosted a tea with 10 Filipina women from the Happy Wives Club, with the youngest marriage being a year old and the oldest being just shy of her 34th anniversary.

While sitting there, I asked Erlinda (the woman married the longest) the same question I’d asked everyone on my travels before her: “What is the one thing you would say is of the utmost importance for every marriage, the one thing every couple must do?”

Without pausing for even a full second, she responded.  Mutual respect.  “Every couple must have mutual respect.”

At the sound of those two words, I turned to all the other women seated around the table enjoying banana bread and tea, ”I have been to seven countries so far, you are my eighth.  And the first answer given when I ask that question has been the same in every single country.”

“That just gave me chills,” Mai, the newlywed of the group, said while rubbing her arms as if to generate warmth.

All-in-all, I discovered 12 common denominators -universal truths, if you will- between all the couples I interviewed.  So now, when someone asks me, “Is there a universal secret to a happy marriage?” I’m able to answer with confidence.  Yes.  Absolutely.  There are at least 12 of them.

If you’re interested in learning more about my journey, and the universal secrets to a happy marriage I learned along the way, you can start by downloading the first four chapters for free.

The book, entitled Happy Wives Club: One Woman’s Worldwide Search for the Secrets of a Great Marriage, went on presale today, and for incredibly selfish reasons, I’d be so honored if you would click here to learn more about it.  Of course, you can also pre-order the book (**wink wink**) for you and your closest girlfriends (Amazon and Barnes & Noble have the book on presale TODAY for 25% off), which would serve two purposes:

First, it would reassure me that this amazing journey and all the weeks away from home, were well worth the cost.  And secondly, that each of us believe, no matter how beautiful our marriage, we can always make it better.  Going from good to great and from great to extraordinary.  That’s what this life -and marriage- is all about. 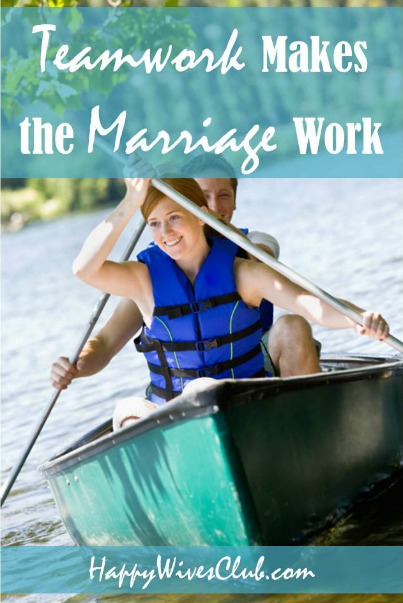 A mantra often quoted in the corporate world is teamwork makes the dream work.  What I’ve discovered in my own life is this is even more true when it comes to relationships and marriage.

A couple weeks ago, my Facebook status read, “London for meetings, Chicago for a conference, Bahamas for a wedding, New York for meetings, San Francisco for a friend’s 50th birthday – and that’s all within the next 4 weeks. Go Team Weaver!”

This is our life.  A bit crazy, utterly hectic, and absolutely wonderful.  We know we can do everything, as long as we do it together.

Team Weaver is how we’re known to our friends.  Over the years, I’ve truly come to appreciate that title more and more.

I can think back over the past ten years, all the out of reach goals we’ve set for ourselves, the “unrealistic” dreams we put front and center.  Even some of the prayers we sent up, most would probably think might come back down with, “Uh, are you kidding?”

But we weren’t kidding.

We have a profound faith in one another.  We have a desire to see the other succeed even more than we desire success for ourselves.

Years ago, my former colleagues invited me to join them for a 5K race for charity.  The company was sponsoring a group of runners and I was asked to be one of them.  Here’s the problem.  I didn’t know how to run.

I know, in theory, running is just about putting one foot in front of the other with greater frequency than you might for walking.

That is in theory.  In reality, nearly every runner will tell you that running is about training; it is about endurance.  It is about learning to breathe properly so you don’t get winded.

When I explained why I couldn’t join the team, one of the gals said, “Oh, don’t worry about any of that. You’re only going to need to run one leg of the 5K.  This is a relay.”

Have you ever tried doing a seated leg press on a weight machine at the gym?  It’s not my favorite machine, that’s for sure, but it is incredibly beneficial for my glutes so I use it every now and then.  When I sit down, place both of my feet on the metal plate and push, I am able to press approximately 250 lbs. But when I reduce the weight to half and attempt to do the same with only one leg, I can’t even move the plate.

It would stand to reason that if I press 250 lbs. with both legs, I should be able to press 125 lbs. with one.  But just as that is not the case with this interesting little contraption at the gym, that’s not the case in life.  Teaming up with your spouse doesn’t just multiply the effort and results by two, it increases your ability to do everything far more than you could possibly think.

The next time you’re shooting for an out of reach goal, team up with your spouse and see how quickly something can go from being impossible to absolutely possible.

MARRIAGE MONDAYS Link Up Party: Bloggers, join us here every third Monday of the month for our fabulous link-up party!  Join us August 19th for our next Marriage Mondays!