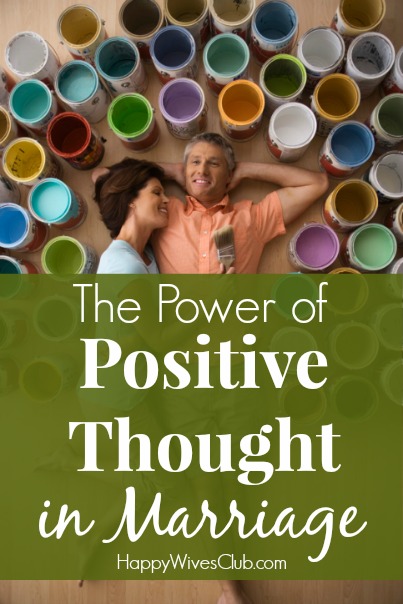 The Power of Positive Thought in Marriage

Last weekend, Keith and I attended a wonderful tree trimming event for a friend.  Never mind that I forgot to bring an ornament for the tree (but I digress…)

While chatting with friends in the kitchen, the husband of a women who’d received an advance copy of my book said something that really made me pause to think.

“What’s so brilliant about your book is you’re focused exclusively on the power of positive thought.  Every interview, if you listen closely to what they’re all saying, it always boiled down to their thoughts,” Barry began.

First, I was absolutely floored that this husband was not only reading the book with his wife but appeared to be enjoying it.  ”Go on,” I prodded him with intrigue.

“Think about the Alchemist,” he began.  I nodded my head as to pretend I was following him.  I knew it was either a book or a movie or both but knew little about it.

“Paulo Coelho, the author of The Alchemist, was known for this quote, ‘You are what you believe yourself to be,” he continued.

“For so many couples, their focus is on what they don’t have in their marriage instead of what they do have.  The thoughts constantly floating through their minds are about what they lack rather than what they have gained.”

At this point, he was positively giddy, as if looking forward to bringing home his point.

Ah yes, the power of positive thought in marriage.  You become what you think about most.  Your focus often becomes your reality.

The unhappy wife might look at the dirty clothes her husband left on the floor or the toilet seat he failed to put down and allow that to frustrate her to a place of believing -in the moment- that this is the sum total of his being.  Allowing that to lead her down a path of mumbling, complaining or even worse, initiating an argument about something so trivial.

The happy wife might step over the dirty clothes knowing he’ll get around to them or pick them up herself knowing that only took 3 additional seconds out of her day.  But her thoughts remain squarely focused on the larger things, like how wonderful he is as a man, husband, father, provider.

Although I didn’t mention this explicitly in the book, Barry was spot on.  Every interview I conducted with a happily married couple, in 18 cities on 6 continents, each one had a distinct focus on the positive.  These couples guarded their thoughts daily about one another and their union.

Gratitude was continuously on their lips.  Grace toward one another in their hearts.  And all that is wonderful about marriage and their spouse is what replayed constantly in their mind.

If you want to find out what else I learned during my travels, and through these wonderful couples happily married 25 years of more, you can pre-order Happy Wives Club from Amazon today for 25% off.

Question: Can you think of an instance when changing your thought actually altered the end result?

Until Monday…make it a great day!