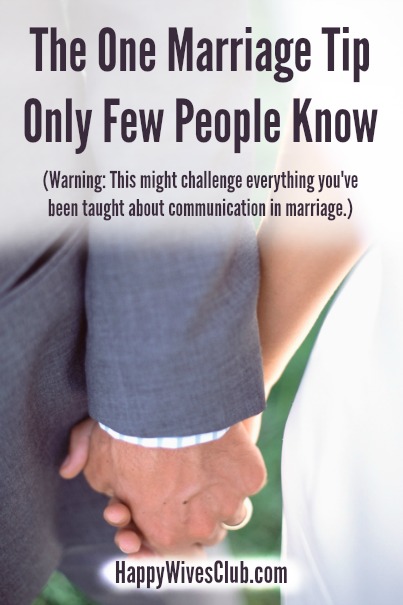 The Marriage Tip Only Few People Know (P.S. It Changes Everything)

When I first wrote this post over a year ago, very few people knew I was in the midst of finishing my second book, The Argument-Free Marriage. This ”marriage tip” of sticking to the original emotion is just one of 28 gems contained in my new book.

Now, that book will release on Tuesday, August 4th (yes, THIS Tuesday). The subtitle of the book, I believe, says it all: 28 Days to Creating the Marriage You’ve Always Wanted With the Spouse You Already Have.

Creating an argument-free marriage is not about perfection. It’s about progress. It’s about arguing less and loving more. It’s about rejecting the common thinking that a couple must argue to have a passionate relationship. It’s about communicating with complete honesty, transparency, not sweeping things under the rug, and getting what it is you both desire most in life and your marriage.

It is possible! Even in this crazy world where everyone tells you marriage will be sooooo hard. What if…just what if, it was never meant to be that hard? What if through the power of words, the addition of consistent vulnerability, and the removal of assumptions you could make marriage less hard and more fun?

Give this article a read (if you haven’t already – as I think it’s been shared more than 150K times) and even consider watching the TED talk I recently gave in which I dove into the 3 things everyone can do to create an argument-free marriage.

Before you knock it…give it a try.

You might be surprised at the amazing, wonderful, extraordinary results you and your spouse have at the end of this 28-day challenge.

Oh yes, and I can’t forget to tell you…this book has been the #1 new release on Amazon (marriage category) since we announced its availability for pre-sales last week. Thank you if you already pre-ordered and are one of the reasons it’s been hanging out at the #1 spot for so long.  And get this! Amazon is offering the book at 51% off (that is as of the moment I’m writing this, grab it now as there’s no way for me to know when that will change). Order it today -maybe even one for you your spouse so you can have your own book when taking the challenge together- and get it in your mailbox next week.

Whether you buy the book or not, please watch the TED talk and give this article a read. Your marriage will thank you. So much love to you and yours! <3

Several years ago, I came home for lunch in the middle of my work day and did something I’d never done before.  I sat on the couch and turned on the television.

I am a believer that all things happen for a reason.

My usual departure from running around the kitchen, stuffing something into my mouth and then heading back to work was –I believe- so I could share this with you.

On my television screen that day sat Rosie O’Donnell on the couch that made Oprah the “queen of talk.”  Attempting to make reparations to her image, Rosie talked about the huge fight between her and iconic journalist Barbara Walters, which resulted in O’Donnell leaving the Emmy-award-winning show The View.

Oprah asked, “Do you regret that moment?”

“Yes, I do,” O’Donnell responded. She said she regretted using her words as weapons and how her out-of-control rage “scared” Walters.

What O’Donnell said next confounded even the talk-show host herself: “For me, at that moment, if I had been braver, I would have just cried and said, ‘You really hurt my feelings.’”

Clearly dumbfounded, Oprah clapped her hands as if having one of her famous aha moments and said, “That is so interesting! That you would say, ‘If I had been braver, I would have just cried.’  Because oftentimes crying is perceived as the weak thing to do.”

She then asked O’Donnell why crying would have been braver than yelling and saying hurtful words.

“Because then you’re vulnerable. Then the authentic feeling that I had, [which] was pain and hurt and rejection [would have come out].”  Instead, as she told Oprah, she put on the same armor she’d chosen to protect her since she was a child.  She shielded her vulnerability, and masked her hurt feelings, with anger.

Consider the last time you were in an argument with your spouse. Hold that thought there for a brief moment, but don’t allow yourself to become angry all over again.  Now that you have the thought in your mind, let’s talk about it.

What was the exact thing that set you off? I’m talking about what you felt, not what you discussed. What was your original emotion in that moment? Was it hurt? Fear? Sadness? Disappointment? Insecurity?  What portion of your underbelly was exposed?

When we become angry enough to begin arguing, especially with someone we love as much as our spouse, we have allowed the original emotion—which would expose our vulnerability—to be covered up by a more aggressive, defensive response.

Rather than exposing the softer side of ourselves, we put up a shield and pull out our verbal sword and begin swinging. We swing left, we swing right, aimlessly out of control and missing the target every time. Yes, we may slice and dice the heart of our spouse, but we miss the mark because we’ve not dealt with the true emotion we’re feeling.

In 2010, I founded the Happy Wives Club with five women who all lived within a 20 mile radius of my home.   Now, just four years later, the club has grown to a community of over 750,000 women in more than 110 countries.

Each week, I write on the pages of the this blog.  I post encouraging words for you.  I share great tips from other happy wives and spend hours each day responding to emails from women around the world.

When writing my book, I traveled to 12 countries on 6 continents interviewing couples happily married 25 years or more to deduce the common denominators.  But never -not in the book or on my blog- have I shared this one marriage tip.

I am open as a book when it comes to this community and yet there is one secret I have kept to myself for all these years.  And quite frankly, if I hadn’t accidentally let it slip in a recent interview with a writer from Babble, who then wrote a full page article on it, it would probably still be my little secret.

My husband, Keith, and I –in our 11 years of marriage- have never argued.  Anyone who knows us can attest to us both being strong and independent people, but in all that time, I’ve never raised my voice at him and he’s never raised his at me.

We talk about everything.  And I mean everything.  We don’t suppress or repress our feelings and we never say things under our breath.  We don’t sweep anything under the rug.  If he does something I don’t like, I let him know it.  When I do something he’s not very fond of, you better believe he lets me know.  From an early age, I’ve always been a bit of a fire piston.  (I can hear my father in heaven saying, “Amen!”)  And Keith is the strongest man I know.

And yet, we’ve never argued.  How is that even possible?  It’s my difficulty in answering that question in a short blog post or article that has kept me from even attempting to try.  The short answer is this: 1) Mutual respect and 2) We stick to the original emotion.

We strive, every moment we are together, to remain vulnerable with one another.  Yes, that can feel strange at first, but I have to tell you, it feels amazing because we’ve never wasted time making up.  Now, of course that means we’ve never experienced “make-up sex” (which I hear can be pretty fantastic).  But then again, why not figure out a way to create that passion –inside and outside of the bed- without the preceding anger?

Most of us are taught from an early age that arguing is normal. Getting mad is how couples communicate when upset. We are shown how to guard our true feelings and emotions by protecting our hearts. We learn that it’s better to go on the offensive than to find ourselves exposed. The problem with all this in marriage is that learned behavior leads to blind conversations. You’re never really fighting about what it is you think you are fighting about.

Sticking with the original emotion—remaining in a place of vulnerability—is the crux of bypassing arguments and getting to the heart of a matter.  My husband and I didn’t learn our “love languages” (as wonderfully defined by Dr. Gary Chapman) until we’d been married nine years.  But it didn’t matter because our respect for one another was so great that everything we did and said was with love and the highest amount of honor.

Mutual vulnerability and respect allows you both to lay it all out on the table. Your dreams, hopes, ambitions, fears, hurt … nothing is off-limits.

We can’t keep everything bottled inside. We all need to have that one person we can be completely honest with about our perceived failures, hurts, successes, and hopes. We need to have at least one person who will love and respect us unconditionally. Who better than the one who shares your bed at night to share your deepest desires also?

As Rosie O’Donnell reminded us all through her uncontrolled rage that fateful day in Barbara Walters’ dressing room: there is great wisdom in sticking with the original emotion, if we would just be brave enough to be vulnerable.

THE BOOK: Read the book that inspired the powerful TED talk and prompted bestselling author of The 5 Love Languages, Gary Chapman, PhD., to write a foreword for the book that recommends a ‘cease fire’ on arguments for 28 days and to instead choose a different (better) way to communicate.