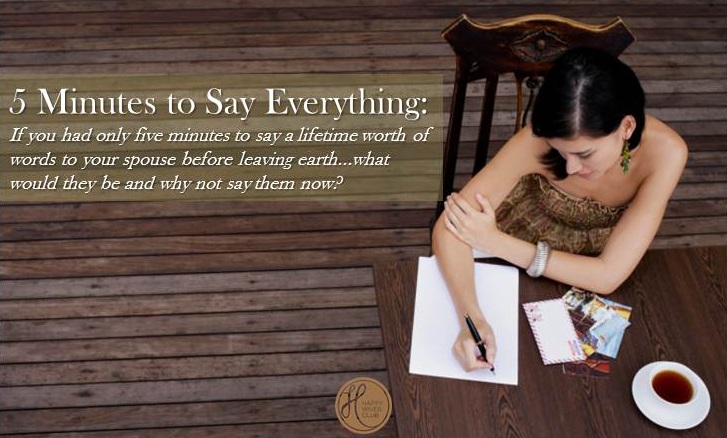 Last 5 Minutes to Say All There is to Say

Last week, Keith and I went to visit my mom.  Because of my recent travels, I’d only seen her a handful times since my father passed away toward the end of last year.  So we were excited to spend some time with her and catch up with everything we hadn’t covered in our frequent phone calls.  As soon as we walked into her upstairs bedroom and sat down, she had something to show us.

She’d been cleaning out the armoire and making room since before my father passed, he’d been using about ninety-percent of it and mom’s things were relegated to about ten-percent (gotta love that man).  ”When I was cleaning out the top, there was a letter in the back from your father, want to see it?” she asked with a smile.  Of course.  It was a letter that threw her for a loop and had rocked her world earlier in the week.  ”I wasn’t good for much of anything, for a little while, after reading that letter,” she told us.  It began with these words, “Bun Bun, I only have a 5 minutes to say all I need to say before I will leave this world forever.”

Imagine having just lost your husband a few months before and then coming across a letter in which he’s telling you he only has 5 minutes to say all he needs to say before he will leave you forever.  Then she looked at the top of the letter and it was dated several years prior to his recent death.  It was at that time she remembered when and why the letter was written (although she’d never seen it before).

Dad had been speaking at a marriage conference (something they did often together) and participated in the session of another speaker.  The audience was told to take out a pen and paper and were given a scenario.  ”You have just died and arrived in heaven,” the speaker told them.  ”At the gate, the angels tell you that you have exactly 5 minutes to return to earth and tell your spouse all there is to say,” he continued.  ”The clock starts now, you have 5 minutes,” and everyone frantically wrote out their very last words.

I can imagine the tears in the eyes of those writing the letter as they imagined saying goodbye for the last time.  What I can’t imagine is how difficult this task must be to complete.  But Keith and I are going to do it and I invite you (and your spouse) to join us.  Set a timer for 5 minutes, don’t think about it, just write.  Put on paper everything you would say to your spouse in those final 5 minutes remaining in your life.

124. He waits patiently for me to join him for morning coffee when I’m sitting on my computer and writing a blog post that I probably should have gotten up earlier to write (as he is right now).

125. He continues to wait for me..because he knows how important this Club is to you and to me…which is also the reason I will only add 3 items to my list today.  He’s waiting and it’s time for me to go.

COMMENTS: With more than 89,000 Happy Wives Club members already actively engaged on our Facebook Community page, what better place to share your thoughts? Join me there and let’s continue the conversation. 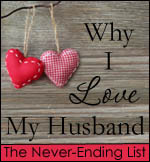