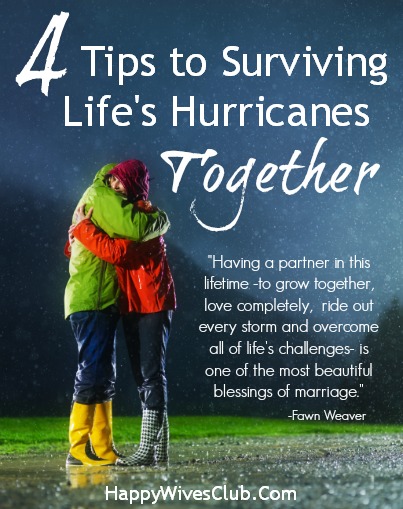 4 Tips to Surviving Life’s Hurricanes – Together

Whenever HWC contributors, like today’s writer Margie Sims, submit posts, my request is always that they be less than 500 words.  My goal is for you to be encouraged -within a few minutes- and able to continue on with your day.

So when I opened up Margie’s post and saw is was longer than usual, my first instinct was to figure out where to ‘trim the fat’.  But as I was pulled into her words, and the beautifully woven story, I couldn’t bring myself to shorten it.

So, yes, this post is a little longer than the usual.  But I hope you’ll agree that it is worth every additional word.

How do you make sure your marriage survives -and flourishes after- life’s hurricanes?

My husband and I married in May of 1986.  We had our first baby by the time we celebrated our first anniversary.  We both desired a large family, and just after our seventeenth anniversary, we discovered number eight was on the way.

With the exception of my parents’ failing health, up until that point, our marriage had been in pretty calm waters.  Oh, the regular irritants like broken washing machines and stomach viruses occurred, of course, but that is life, after all.   He was climbing the corporate ladder with a promise of a job relocation soon, our kids were healthy, we were happy.

In July of 2003, we were living in Memphis and I was about seven weeks pregnant. That afternoon was like any other southern summer day with high temperatures and not much of a breeze.  Then the wind stirred, picked up speed and began not merely bending and snapping the trees, but sending them flying.  Straight-line winds -we learned later- that act like a tornado, only without the funnel cloud. Memphians wryly refer to it as Hurricane Elvis.

The power was out, debris filled the yard.   We all went out back, and as I waded through the broken branches, I saw the tiniest baby squirrel on the ground, umbilical cord still attached.  For some reason, it made me think of my own baby.  A sign, I would soon learn.

That night, in the middle of the night, I lost the baby.  It was my first miscarriage after having seven normal pregnancies that produced big, fat, overdue babies. Traumatic, to say the least.

Two days later, the power still out, we threw away all of the food in fridge.  For a family of nine, it was a small fortune.

On day three, the transmission on the car went out.

On day four, some dear friends invited all nine of us to stay with them until our power was restored.  I was so grateful to get a hot meal and a hot bath–a tiny bit of relief.  I will never forget their hospitality.

On day five the power in our neighborhood was restored.  People were cheering in the streets for the power company. With power on, we went home and restocked our fridge, only to realize by day seven that it had died.  For the second time, we threw away our food. And we bought a new fridge.

On day eight, the A/C joined the ranks of the transmission and the fridge.

Then, to top it all off, the job relocation fell through.

In span of eight days, we lost our baby, our savings, and one of our dreams.  The stress was unbelievable. It was the most pressure we had been under since we had been married. Hurricane Elvis left a mark I have never forgotten.

Fast forward one year.   We had a twelve week old baby and had just relocated to Vermont for a new job. Our friends had invited us to the annual Mozart Festival in the Greene mountains; I was holding my daughter while watching the sun sink behind them.  As the sun was setting to Mozart, it occurred to me that it had been almost exactly one year since that terrible trial.

I learned from that trying season, that though we may hope for and even experience long periods of quiet, hurricanes are just a part of life.  As I reflect on that trying time, here is how we weathered the storm.

I would not have chosen to go through the pressures of that week so long ago, but I am thankful Hurricane Elvis came to visit us that day.  It was our first real trial, and I don’t think we would have strengthened our marriage or faith, to this magnitude, any other way.

QUESTION: How have you and our spouse overcome life’s challenges together?

Margie Sims is a writer and speaker. She lives in Richmond, Virginia, where she survives life's hurricanes by keeping the faith and the funny in life with ten kids. Follow her blog at MargieSims.com