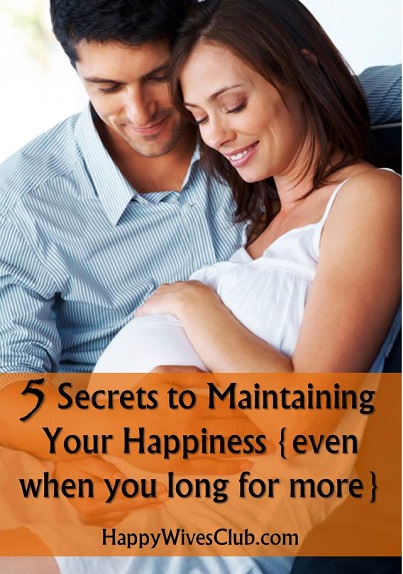 Have you ever longed for something that seemed as though it might never come?  Did you find it difficult to keep your inner peace and happiness during this time?

Maintaining your happiness -even when you desire more- is not only possible, it can begin today.

When Keith and I married in 2003, not in a million years could we have predicted more than a decade later we’d still be without children.  We picked out our son’s name more than 10 years ago (Grant Edward).  We easily agreed on our daughter’s name, as well (Sidney Elisabeth).  As of today, we still have neither.

After four IUI cycles (without and without added hormones), the doctors have told us our only option is IVF and it’s quite possible that still won’t work.  But here is the important point.  In spite of this desire unattained, we are still overwhelmingly happy.

I’ve often heard the stories of women who long to have a child so badly they make everyone, especially their husbands, miserable in the waiting.

Here are 5 secrets to remaining happy, even in the midst of waiting for something you desperately desire:

1. Remain in the present. I know this is so much easier said than done but this is the single most important thing you can do to create and sustain happiness in your life.  Dr. Richard Carlson (author of Don’t Sweat the Small Stuff) did a brilliant job laying this out in his bestselling book, You Can be Happy No Matter What.

2. Be grateful for what you have at this moment.  Keith and I have not been able to reproduce and are undergoing fertility treatments (that may or may not eventually work) but our focus is not on this aspect of our lives.  Our focus, and gratitude, is centered on everything we currently have and there is so much to be grateful for in this moment.

3. Trust that you do not currently have because you are not yet ready.  In life, we go through many seasons and each one is meant to teach us important lessons about who we are and how to best love those around us.  To believe you have not yet received because you are not ready is humbling but also a great relief.  The latter because it confirms that you have exactly what you were built to have in this very moment.

4. Look at the adversity as a building block for your marriage.  Keith and I are a united front on all issues, including this one. Joining together as a team to combat adversity (not against each other but the two of you against the challenge) builds and strengthens your marriage.  It’s the “us against the world” mentality that causes the relationship to be closer than close.

5. Thank God for desires unfulfilled.  We do not yet know the reason we don’t have children. But what we do know is when we look back at other desires that went unfulfilled, we’re so thankful for each one.  So we have to trust we will look back at this time in our lives and be equally grateful.  Garth Brooks says it so much better than I ever could with his song, Unanswered Prayers.

If you believe you need more than what you have in this moment to be happy, you never will.