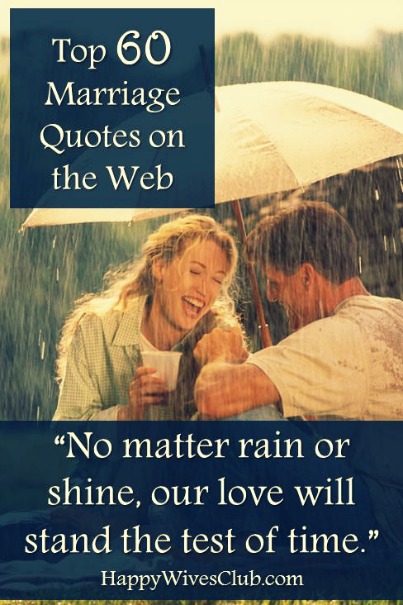 Top 60 Marriage Quotes on the Web

Several years ago, I began compiling a list of the best marriage quotes on the web.

There is just something about being reminded by others of how wonderful marriage is that I find so beautiful.

I’d love to know your favorite marriage quotes (leave them in the comment section below), and I thought I’d share with you mine.

So here goes!  The top 60 marriage quotes on the web (at least of those I’ve uncovered so far):

“We have the greatest pre-nuptial agreement in the world. It’s called love.” -Gene Perret

“There is no greater risk than matrimony. But there is nothing happier than a happy marriage.” -Former British Prime Minister, Benjamin Disraeli

“Marriage is not a noun; it’s a verb. It isn’t something you get. It’s something you do. Its the way you love your partner every day.” -Barbara De Angelis

“A great marriage is not when the ‘perfect couple’ comes together. It is when an imperfect couple learns to enjoy their differences.” -Dave Meurer

“The goal in marriage is not to think alike, but to think together.” -Robert C. Dodds

“A successful marriage requires falling in love many times, always with the same person.” -Mignon McLaughlin

“Marriage: Love is the reason. Lifelong friendship is the gift. Kindness is the cause. Til’ death do us part is the length.” -Fawn Weaver

“Being in a long marriage is a little bit like that nice cup of coffee every morning – I might have it every day, but I still enjoy it.” -Stephen Gaines

“A good marriage is each for the other and two against the world.” -Robert Brault

“The bonds of matrimony are like any other bonds – they mature slowly.” -Peter De Vries

“Chains do not hold a marriage together. It is threads, hundreds of tiny threads which sew people together through the years.” -Simone Signoret

“Marriage provides the solace of worked-on friendship and the joy of being known profoundly.” -Imogene Stubbs

“A happy marriage is a long conversation which always seems too short.” -Andre Maurois

“Married couples who love each other tell each other a thousand things without talking.” -Chinese Proverb

“A long marriage is two people trying to dance a duet and two solos at the same time.” -Anne Taylor Flemming

“The sum which two married people owe to one another is defies calculation. It is an infinite debt, which can only be discharged through eternity.” -Johann Wolfgang von Goethe

“Happy marriages begin when we marry the ones we love, and they blossom when we love the ones we marry.” -Tom Mullen

“There is no greater happiness for a man than approaching a door at the end of a day knowing someone on the other side of that door is waiting for the sound of his footsteps.” -Ronald Reagan

“Marriage is our society’s most pro-child institution. If you want kids to do well, then you want marriage to do well.” -David Blankenhorn

“The happy State of Matrimony is, undoubtedly, the surest and most lasting Foundation of Comfort and Love . . . the Cause of all good Order in the World, and what alone preserves it from the utmost Confusion.” -Benjamin Franklin

“Marriage has the power to set the course of your life as a whole. If your marriage is strong, even if all the circumstances in your life around you are filled with trouble and weakness, it won’t matter. You will be able to move out into the world in strength.” -Timothy Keller

“To keep the fire burning brightly there’s one easy rule: Keep the two logs together, near enough to keep each other warm and far enough apart – about a finger’s breadth – for breathing room. Good fire, good marriage, same rule.” -Marnie Reed Crowell

“Once we figured out that we could not change each other, we became free to celebrate ourselves as we are.” -H. Dean Rutherford (in a letter to his wife on their 59th wedding anniversary)

“A successful marriage isn’t the union of two perfect people. It’s that of two imperfect people who have learned the value of forgiveness and grace.” -Darlene Schacht

“In the opinion of the world, marriage ends all, as it does in a comedy. The truth is precisely the opposite: it begins all.” -Anne S Swetchine

“Marriage is like a fine wine, if tended properly, it just gets better with age.” –Unknown

“Love is a flower which turns into fruit at marriage.” -Finnish Proverb

“I used to believe that marriage would diminish me, reduce my options. That you had to be someone less to live with someone else when, of course, you have to be someone more.” -Candice Bergen

“Marriage: If you want something to last forever, you treat it differently. You shield it and protect it. You never abuse it. You don’t expose it to the elements. You don’t make it common or ordinary. If it ever becomes tarnished, you lovingly polish it until it gleams like new. It becomes special because you have made it so, and it grows more beautiful and precious as time goes by.” - F. Burton Howard

“Excitement and fire are not qualities inherent to relationships they are what happen when two people make marriage the number one priority.” -Michele Weiner-Davis

“‎A happy marriage has in it all the pleasures of friendship, all the enjoyment of sense and reason – and indeed all the sweets of life.” -Joseph Addison

“Marriages, like a garden, take time to grow. But the harvest is rich unto those who patiently and tenderly care for the ground.” -Darlene Schacht

“A good marriage is a contest of generosity.” -Diane Sawyer

“The highest happiness on earth is the happiness of marriage.” -William Lyon Phelps

“The real act of marriage takes place in the heart, not in the ballroom or church or synagogue. It’s a choice you make on your wedding day, and over and over again and that choice is reflected in the way you treat your husband…” -Barbara De Angelis

“Motto for the bride and groom: We are a work in progress with a lifetime contract.” -Phyllis Koss

“A good marriage is one in which allows for change and growth in the individuals and in the way they express their love.” -Pearl S. Buck

“There is nothing more admirable than two people who see eye-to-eye keeping house as man and wife, confounding their enemies, and delighting their friends.” –Homer

“A happy marriage is a selfless journey in which the happiness of another person is essential to your own.” -George & Yvonne Levy

“Marriage succeeds only as lifetime commitment with no escape clauses.” –Dr. James Dobson

“The more you invest in a marriage, the more valuable it becomes.” - Amy Grant

“In every marriage, more than a week old, there are grounds for divorce. The trick is to find, and to continue to find, grounds for marriage.” -Robert Anderson

“You didn’t learn how to play an instrument well in one night. It will take time to learn how to “make music” with your spouse too.” -J & G Murphy

“More marriages might survive if the partners realized that sometimes the better comes after the worse.” -Doug Larson

“Happy marriages begin when we marry the ones we love, and they blossom when we love the ones we marry.” -Tom Mullen

“A great spouse loves you exact the way you are. An extraordinary spouse helps you grow; inspires you to be, do and give your very best.” -Fawn Weaver

“In the enriching of marriage, the big things are the little things. There must be constant appreciation for each other and thoughtful demonstration of gratitude. A couple must encourage and help each other grow. Marriage is a joint quest for the good, the beautiful, and the divine” -James E. Faust

“Marriage does not guarantee you will be together forever, it’s only paper. It takes love, respect, trust, understanding, friendship and faith in your relationship to make it last.” –Unknown

“The most precious gift that marriage gave me was the constant impact of something very close and intimate, yet all the time unmistakably other, resistant – in a word, real.” -C.S. Lewis, A Grief Observed

“A good marriage is good for you. That isn’t just a platitude. Mounting research shows that it is the literal truth. When your marriage is healthy, your body and mind are healthier.” -Cliff Isaacson

“A good marriage is that in which each appoints the other guardian of his solitude.” -Rainer Maria Rilke

“Marriage is a commitment- a decision to do, all through life, that which will express your love for one’s spouse.” -Herman H. Kieval

SAVE THE DATE: Bloggers, join us here every third Monday of the month for our fabulous link-up party! Join us September 16th for our next Marriage Mondays!